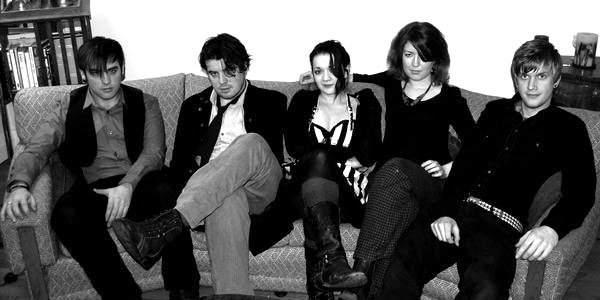 nicorola: Hello! Thanks for taking the time answering some questions! Can you please introduce yourself?

Julia: Hi, I’m Julia Indelicate, from the band The Indelicates 🙂

nicorola: Your debut record was released two years ago. What happened in the meantime?

Julia: It took a little while to get released from our record deal, so we were sitting ducks for a bit. It was very frustrating because we couldn’t do very much until we knew what the label wanted from us. We finally managed to persuade them to drop us last year, and shortly after that we released a 7″ Vinyl shaped book called Words By Simon & Julia Indelicate, which featured poems, songs, and footnotes on some of our work so far. In September 2009 we went to Berlin to record our second album in the former East German Radio complex, and we’re about to release the CD version of that album. We started working on Corporate Records, our pay what you like label, late last year, and released the first incarnation of the Indelicates second album in April on Corporate Records. So far its been amazingly successful! We also sold Fudge at Christmas, which was also lots of fun 🙂

nicorola: You just finished your new record, which was released in April. What was the experience like recording this album?

Julia: It is quite difficult to record second albums. Most of what we really wanted to say, we’d already said very clearly in the first album, and we didn’t want to repeat ourselves! We had a little more time to spend on the recording, which means that some of the music is lusher, and possibly more acoustic sounding. The recording studio was in the old east german radio building, which was surreal and intriguing at the dame time. We found ourselves sifting through old news tapes to find samples, and old documents just left lying around. Working with a different producer (Ed East from the band Chikinki) was also exciting, as every new person you work with adds their own insights into what you’re trying to do. Ed certainly shared our sense of adventure, and we had great opportunities to experiment.

nicorola: What are some things that you really love about the new record?

Julia: I really love everything about it, but I especially like Savages and We Love You, Tania. I love the weird samples of german news reports from the 1980’s about the nuclear corridor on the song Roses, and the humming choir on savages. The cover art was really tricky to do ( because we’re hanging, and it’s quite dangerous!) but I also love it. I’m making jewellery based on the hanging this weekend, so we’ll see how much people like that! The lyrics in Savages, written by Simon Indelicate, blew me away when I heard them and, also, are quite hard to listen to because they’re very personal. I think the whole album is a lot more personal.

nicorola: Is there something that changed your mind or your overall approach to music since “American demo”?

Julia: I think we are more experienced with both the dying music Industry and the actual making of records than we were before. I think we’re about to enter a really interesting time in music and data making, and Corporate Records is our way of taking part in it.

nicorola: You decided to do a Radiohead-like offer: download the album and pay what you want. Why do you chose that way of distribution?

Julia: We chose to release the album on a pay-what-you-like basis as an experiment really. We were unhappy with the silly things which labels do to try and sell records, and how much of the money spent by them resulted in very little sales or exposure. Most of the actual success we have had as The Indelicates has been using the net, so we were very used to having a trust based relationship with fans.

nicorola: So how come you decided to use Corporate for this album as opposed to another label or a platform like Bandcamp?

Julia: We wanted something that looked cool and that we had control over. Anyone who uses Corporate records can change the way it works for them, and we wanted something which proved that you don’t have to be a big band like Radiohead to make the system work. You just have to trust people, and reward them for their trust in return.

nicorola: After nearly two and a half month: was this decision a success?

nicorola: In your first email concerning this interview you wrote: “we’re recording at the moment.” What did you record?

Julia: We are recording the third Indelicates album, which is a concept album called David Koresh Superstar, about a cult leader in Waco, Texas, in the early 1990s. It already sounds pretty cool, and we have lots of guest singers and musicians on it.

nicorola: You will be making videos for every track on the album and releasing them over the next six months. What is the idea behind this?

Julia: When you aren’t tied up with release dates and singles you can do pretty much anything! Our rhthm guitarist Al and his partner Stuart do most of our videos, and we thought it would be cool to do lots. We’d also like to make every video into one ling film, like that Michael Jackson film Moonwalker. Hahaha!

nicorola: You’re currently touring the UK, heading towards Germany in June. Can you get an idea wether or not people enjoying your new songs?

Julia: Yesterday we played the UK launch of the CD in London. Everyone knew the words to the new album. So that’s a good sign! I think people really like Savages. We play that one acoustically at the moment, and it’s very popular like that.

nicorola: What can the people in Freiburg and Cologne expect from your live show?

Julia: We will play for as long as we can; we will play all the hits; and Simon might just fo his Bob Dylan impression again 🙂

nicorola: I’d like you to make us a mix-tape. Pick five tracks with a theme of your choice.

nicorola: Do you want to say anything else to my readers?

Julia: Come and see us in Koln, Freiburg or Stuttgart on the 9th-11th June. Or, if you miss us then, Simon and Julia will be back for a number of shows in august! Kisses. X